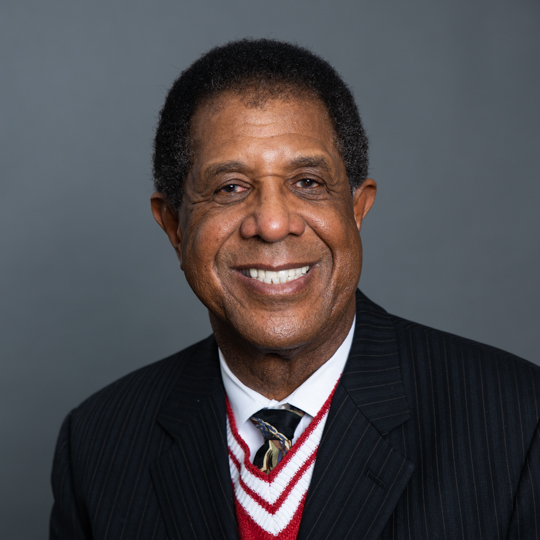 John Sibley Butler holds the J. Marion West Chair for Constructive Capitalism in the Graduate School of Business (Department of Management). He is a professor in the Management Department and holds a joint appointment in Organizational Behavior in the College of Liberal Arts, where he holds the Darrell K. Royal Regents Professorship in Ethics and American Society (Sociology). His research is in the areas of Organizational Behavior and Entrepreneurship/New Ventures. His research appears in professional journals and books. He is the Sam Barshop Fellow at The IC2 Institute, an organization dedicated to the creation of new ventures throughout the world.

For the last seven years, Professor Butler has occupied the Distinguished Visiting Professor position at Aoyama Gakuin University in Tokyo, Japan, where he lectured on new venture start-ups and general entrepreneurship. This past year, he was named as a distinguished Libra Professorship at The University of Southern Maine.

Professor Butler has served as a consultant for many firms and the U.S. Military. At this time, he is Management Consultant for State Farm Insurance Companies, with Corporate Headquarters in Bloomington, Illinois. In this connection, he has given lectures on general management issues of corporate America. He is also one of the distinguished professors who composed the Economic Advisory Team of Governor George Bush’s 2000 Presidential Campaign.

Professor Butler has appeared on over 30 radio and television programs, including Eye On America (CBS Nightly News), The Jim Leher News Hour, CBS Radio Talk Show, The Osgood Report, and Public Radio. In addition, Professor Butler’s research has appeared in The Wall Street Journal, The New York Times, The Chicago Tribune, Time Magazine, U.S. News and World Report, and other newspapers and magazines across America. His books include Entrepreneurship and Self-Help Among Black America: A Reconsideration of Race and Economics; All That We Can Be: Black Leadership and Racial Integration the Army Way (with Charles C. Moskos – Winner of the Washington Monthly Best Book Award); Immigrant and Minority Entrepreneurship: The Continuous Rebirth of American Communities (with George Kozmetsky, forthcoming); and, Forgotten Citations: Studies in Community, Entrepreneurship, and Self-Help Among Black-Americans (with Patricia Gene Greene and Margaret Johnson, forthcoming).

Professor Butler received his undergraduate education from Louisiana State University in Baton Rouge and his Ph.D. from Northwestern University in Evanston, Illinois.

Doris Wilkinson and John S. Butler. 2002. The Clinical Irrelevance and Scientific Invalidity of the 'Minority' Notion: Deleting it from the Social Science Vocabulary. Journal of Sociology and Social Welfare 29, 21-34.

John S. Butler. 1997. Entrepreneurship and the Advantages of the Inner City: How to Augment the Porter Thesis. Review of Black Political Economy 24, 39-49.

Charles C. Moskos and John S. Butler. 1996. All That We Can Be: Black Leadership and Racial Integration the Army Way. Basic Books.

John S. Butler. 1995. Myrdal Revisited: The Negro in Business: The Professions, Public Service and Other White Collar Occupations. Journal of the American Academy of Arts and Sciences 124, 199-121.

John S. Butler. 1995. The Historical and Continuous Significance of Philanthropy: A Case Study. Alternatives in Philanthropy.

John S. Butler. 1992. The Roots and Role of the Black Church. Agenda: The Alternative Journal of Critical Issues 2.

John S. Butler. 1991. Desegregation and the Quality of Education. The World and I (The Washington Times Corporation) 6.

John S. Butler and Robert Woodson Jr.. 1991. The Greenwood Section of Tulsa: The Legacy of Self-Help. Agenda: The Alternative Journal of Critical Issues 2, 2-9.

John S. Butler. 1989. Test Scores and Evaluation: The Military as Data, in Test Policy and the Politics of Opportunity: The Workplace and the Law, Bernard Gifford, ed. Boston, MA: Kluwer Academic Publishers.

Charles C. Moskos and John S. Butler. 1989. The Military Since World War II, in A Special Report for the National Academy of Sciences,